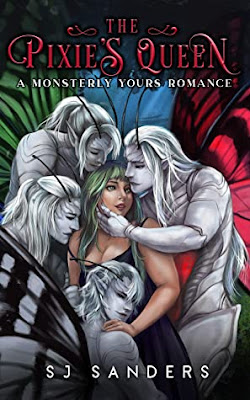 Born into a family of witches, Orenda has the misfortune of being the sole member of her family born without magic. The smallest bit of magic that she can claim for herself is the ability to sense out magical talismans. She is drawn to them and makes it her task to keep the most powerful of them out of the reach of her family. Yet, when she comes across an ancient talisman in an antique shop, she is swept away by its magic into the fae world, but not unchanged.

Shrunk and stranded alone in the depths of the troll kingdom, Orenda must rely on the help of a hive of male pixies. Although they say that she is their queen, and lure her with every touch, they promise to help her return home. They are nothing like she’s ever imagined a pixie to be and give her a taste of a life that she couldn’t have imagined. In a world of magic, she—a magicless witch—strangely finds her place until events provide an opportunity to return to the human world. It leaves Orenda with a choice: to go back home or remain by their side?
Among pixies, although long-lived, they only have a opening of a handful of years to find their mates before the elders determine that the hives be broken and the males stripped of their breeding and mating abilities to serve as protectors for young unmated queens. Shavish is determined that his hive, though well beyond the suitable age of mating, do not come to a similar fate. His hive brothers Orel and Gwin may have resigned themselves to being guardians and Dazi retreating to his scholarly works, but he is not willing to give up yet. Although being mated to a small wingless queen wasn’t quite what any of them imagined, they resolve to not give her up. They will court their queen and win her for their own.

The Pixies Queen is a m/m/f/m/m romance and does contain m/m.

I've been reading a lot of SJ Sanders recently and am really enjoying her stories. Sanders is, like me, a fan of ancient mythologies. Because of this, her stories are richly detailed, structured and built. They are emotional, with steamy scenes and well-developed characters. When I get one of her books I know it means that I'm going to be reading for a couple of days and the story has meat I can get stuck into.

Orenda is a witch, but she is a witch who can only sense magic, not work it. While antiquating in Florida she finds an interesting magical item and rubs the dirt from it to get a better look.

Transformed and transferred to the Fey world Orenda meets four pixies who've been expecting her. Cue one confused woman learning what it mean to be the queen of a hive in a magical world.

Shavish is the head pixie of the hive. These four males were supposed to have stopped looking for their queen years ago, but Shavish refuses to give up, to the point where it's causing fractures in his hive. When he's told that their queen is on the way, he talks his hive into making one last attempt and off they go. While they're confused that their queen isn't a pixie, with the exception of Gwin who needs a bit of time, they accept her, as does the whole pixie community. This book has a minimum of angst, unlike Sander's Dark Spirits books so it's a pleasant read in our darker than usual times.

This is one of the Monsterly Yours series. You don't need to read the other books to read this one, this book has been my introduction to the series, however, the glimpse of the hero and heroine from The Troll Bride made me curious enough to go back and read the whole series.

You can find The Pixie's Queen here. I recommend looking through her full collection.