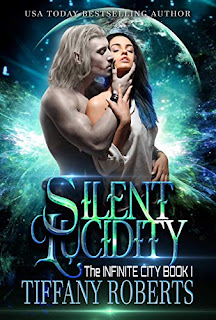 Abella hasn’t allowed four years of slavery to break her spirit, but after numerous failed escape attempts, the chances of making it home to her family seem bleak. That is until she shares a passionate, forbidden dance with a silent stranger. His piercing silvery eyes haunt her with a taste of hope.

Intense, mysterious, and deadly, Tenthil may be the key to Abella’s freedom. But as she finds herself increasingly drawn to him, she realizes the truth—Tenthil has no intention of taking her home.

Will he be her salvation, or will she trade one master for another?

Early fair warning: I told you two weeks ago that I'd recommend Tiffany Roberts time and again and here it is. I am going to gush a little, maybe a lot.

Arthos is famous as a powerhouse of politics and trade owned by the Consortium. The whole planet is one city, including the massive underground caverns. Humans have only just established an embassy there, their membership sped unusually quickly. It is also notorious as a place where those enslaved can disappear forever and where humans are considered little more than animals by some of the many races that call the Infinite City home.

Abella, a professional dancer, was kidnapped from Earth and has been the property of an alien who detests her for four years, living as his slave. The only moments of freedom she knows is when she dances.

Tenthil was kidnapped as a child and trained as a deadly assassin. The moment he sets eyes on her, his mating instinct is tripped and he will destroy her owner and the organisation that owns him to save her.

I love this story so much and every story in this series. This novel introduces Alkorin, the hero of the second novel and my favourite hero of the series. The moment you see him, you'll know why. This is, by far, my favourite series of Tiffany and Robert and this story is the best of them so far, though I do love the Alkorin's book, Shielded Heart.

Start with Entwined Fates, which is a prequel novella.

I cannot recommend this book enough. If you like my books, you'll love these.

Fair warning: To me, this book is flawless.

You can find Silent Lucidity here.