Sold to the Orc 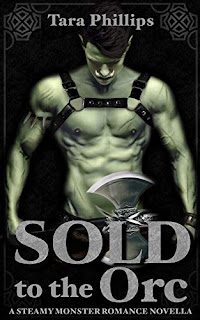 Cyna is sold to the orc warrior as his bride
But Atul, the chieftain's son, wants more than just her body
He wants her heart, and an heir.

Sold… her bride price paid for by an orc. Cyna’s father has traded her to this monstrous, battle-scarred warrior for a bag full of coins. She’s taken from her home, her family, her village, and everything she’s ever known.

Tall, imposing, scarred, and green. His white tusks curve up menacingly. Atul is the perfect image of a monster. A brute covered in leather and weapons, and yet he’s not at all what she expected. The orcs are not the monsters she’s been told to dread.

He says that he doesn’t want her fear. Instead, he wants her to acquiesce to him willingly. Wants her submission, her heart, and her womb. Because he intends to take his husbandly rights… intends to fill her belly with his child. And she’s finding it impossible to resist him.

Cyna is sold by her father to a band of Orcs, or more specifically, to their leader, as a bride for his son, Atul. Once back in the Khelukkhel mountain, the home of the Orcs, Cyna finds the Orcs aren't like the stories and while Atul's aim is to father sons, he wants a willing bride and a deeper attachment.

As stated above, these are short novellas, but they're a joy to read and there's no side stories to distract from the plot, which is two people falling in love and having a little kink along the way.

I Beta read these books for Tara and have loved all three of them. The third is my favourite. You don't need to read them in order but while you can skip the first two to read the third, but you should definitely read all three books in order, with this one being the first.

I love these books and thoroughly recommend them. They're sweet, easy reading with well written steamy scenes.