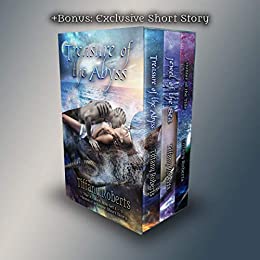 It all began when a storm capsized a small boat, sending a woman into the raging ocean—and into the arms of a wandering kraken whose curiosity became obsession.

Humans and krakens share a tragic, violent past, but Jax must possess Macy even though he knows it can only end in disaster. Neither Jax nor Macy can imagine how their love will change their respective worlds—or how it will change their hearts.

How much is he willing to forsake for the female he desires?

How much are all the kraken willing to risk?
------
This collection includes Books 1-3 of The Kraken Series as well as an exclusive, never before released short story, The Anniversary.

Full disclosure, I haven't read the entire series yet. With all of the writing I'm doing, I can only afford to spend a little time reading and there are so many good books.

I have read the first two and loved them. In the first book Macy gets lost at sea and is quickly found by Jax, an independent minded Kraken who should be helping his people but is more interested in exploring. When he saves Macy from drowning it ignites a fuse that threatens to destroy, or save both of their homes.  The second couple Aymee and Arkon were my favourite with their long, shy courtship that blows up out of control when the real bad guys show up into town. I also love this book because it delved deeper into the story of the world that created the Krakens. I love good worldbuilding, which is something Tiffany Roberts, husband and wife team Robert and Tiffany Freund, are excellent at.

Here, the Kraken are the results of genetic engineering, half-cephalopod and half-human. They change colour, showing off their emotions and it's such a sweet addition to the story and makes me so happy to read.

Tiffany Roberts writes, in my opinion, some of the best SFR on the market. If you're not already a fan, I encourage you to go have a look at their stories. They write both science-fiction romance and fantasy romance. The science-fiction romance is represented by this series and their Infinite City series. For their fantasy romance, there is the Isle of the Forgotten series, their Venus Needs Men duology which is a part of the larger series, a collaboration with other writers, as well as individual stories in both genres. My favourite FR story of theirs is His Darkest Craving, though The Warlock's Kiss comes a very close second.

This boxset contains the first 3 stories and a bonus exclusive short story.

I would and will recommend everything Tiffany Roberts writes.

Fair warning: Thar be Krakens and they're the heroes.

You can find The Kraken Boxset here.